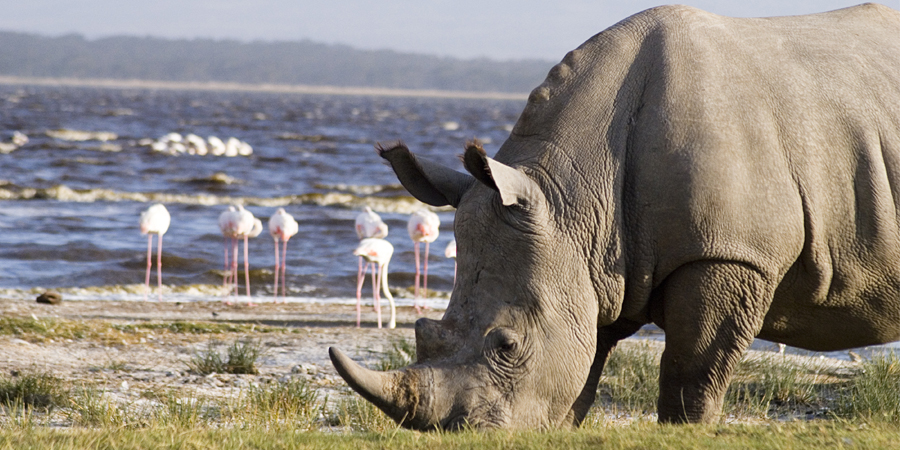 Without further ado, we set off after breakfast (8:30am) for Lake Nakuru National Park, with our first brief stop at the Great Rift Valley View Point for photos. Famously, Lake Nakuru attracts vast numbers of fabulously coloured pink flamingos to its shallow waters. Known all over the world for its flamingos, it’s alkaline and is harboring a population of over 40 black and over 60 white rhinos, but the flamingos, of course, have always been the main attraction. At times, there may be almost 2 million flamingoes in the residence, forming a stunningly beautiful deep pink band around the edge of the lake shore. We will have our lunch at the lodge followed by an afternoon game drive in the shores of Lk. Nakuru until dusk. Dinner and overnight at Lake Nakuru Lodge | Flamingo Hill Camp -(Luxury). – Meal Plan (Breakfast, Lunch & Dinner)

The highest of all the Rift Valley lakes, Lk. Naivasha is a beautiful shallow freshwater lake fringed by thick papyrus reeds. The waters of the lake draw great array of bird life to its shoreline. Buffalo wallow in the swamps, whilst the large hippo population laze their days in the shallows. Giraffe wander among the acacia, whilst the Colobus monkeys swing from the green canopies above. From here, you can visit Elsamere, Hells Gate National Park & Crescent Island game sanctuary. After an early morning breakfast, drive to Amboseli via Lake Naivasha with a 1 hr boat ride including a visit to Crescent Island for a walk amongst the wildlife. Before proceeding to Amboseli arriving in time for check in and late lunch. Amboseli National Park provides the classic Hollywood image of Africa. Set in rolling savannah scenery it is dwarfed by the presence of the pink-tinged, snow-capped peak of Mount Kilimanjaro which, at 5,896 meters, is the highest free-standing mountain in the world and topped by one fifth of all the ice in Africa. Against this magnificent backdrop roam vast herds of elephant accompanied by a kaleidoscope of other fabulous beasts -lion, buffalo, cheetah, giraffe, baboon, gazelle hippo and wildebeest to name but a few. There are also over 400 species of birds, all manner of reptilian, flora and fauna and some of the most soul-searing views in Africa. Freshen up in your room or soak in the fabulously constructed swimming pool overlooking the snow-capped Mt. Kilimanjaro, before an introductory late afternoon game drive app 1630hrs in the Park with a perfect view of Africa’s highest mountain, Kilimanjaro on the backdrop! Dinner and overnight at Kibo Luxury Safari Camp | AA Amboseli Lodge – Meal Plan (Breakfast, Lunch, Dinner)

After breakfast, we depart for Nairobi arriving at around 1430hrs. Drop off at the JKI Airport or at your Nairobi hotel. Meal Plan (Breakfast)