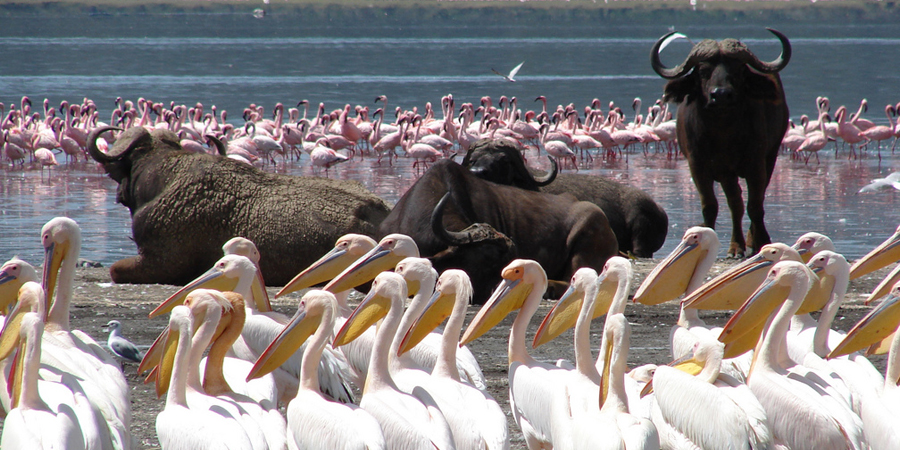 Arrive at the Nairobi’s JKIA and after immigration formalities, head over to the luggage carousel to claim your luggage. A Tropical Vacations’ representative, who is holding a paging board with your name on it, will be waiting just outside the arrivals area to meet, welcome, and transfer you to your hotel. You will have the rest of the morning to freshen up and have breakfast before safari. Sunstar Hotel |Hennessis Hotel | Meridian Court Hotel/similar- Meal Plan (Bed & Breakfast).

After breakfast at approximately 9:00am, depart by road, heading North through lush agricultural farmlands and homesteads, passing the Equator to Kongoni Camp for check-in. Then an early lunch followed by afternoon game viewing drive at Ol Pejeta Conservancy. One of only four private game reserves in Kenya, Sweetwaters excels in the provision of privileged seclusion and private game viewing. Thanks to its private status it also allows unforgettable pleasures of night game drives, guided bush walks, as well as horse or camel rides across its game-teaming plains. Dinner and overnight stay at Kongoni Camp / Budget Town Hotel/ Similar

After breakfast at the camp, we will drive further north to Samburu Game Reserve – Kenya’s rugged and semiarid reserve of the Northern Eastern Province. Lunch at the lodge/camp. After lunch, afternoon game viewing drive in the reserve. Dinner and Overnight at the Samburu Sopa Lodge| Sentrim Samburu Camp( Luxury)/ Budget Camp. Meal Plan (Breakfast, Lunch, Dinner)

Samburu National Reserve – a place of endless skies, dust-red plains and palm-fringed rivers. Samburu National Reserve lies on the fringes of the vast and arid desert once known as the Northern Frontier District, whose heat-scorched scrublands extend all the way to the jade-green waters of Lake Turkana and beyond. Physically dramatic, the 104 square kilometre landscape of the Reserve features rocky battlements, craggy scarps, dry river beds and fallen boulders rising out of the thorn scrub against a backdrop of the far-distant hills, including the great red table mountain known as Lololokwi.

As for wildlife, Samburu provides one of the few sanctuaries in Kenya for the endangered Grey’s zebra, the rare beisa oryx, and the blue-shanked Somali ostrich whilst large herds of elephant roam the gaunt hills during the day before returning to bathe on the banks of the river in the evening.

Early morning game drive is followed by a late breakfast in the camp. After which you enjoy an afternoon game drive through the forest of the Ewaso Nyiro River with very good chances of sporting elephants. Dinner and overnight at Samburu Sopa Lodge| Sentrim Samburu Camp (Luxury)/ at a Budget Camp. Meal Plan (Breakfast, Lunch, Dinner

After breakfast at the lodge/camp, we depart to Lake Nakuru passing via the Nyahururu Water Falls (Thompson Falls – commonly known as the T-falls!) stopping briefly. Famously Lake Nakuru attracts vast numbers of fabulously coloured pink flamingos to its shallow waters. Also present at the lake are hippos, black rhinos, giraffes, lions, leopards, various other animals, and a profusion of birds. Enjoy an afternoon game drive in the shores of Lake Nakuru until dusk. Dinner and overnight at |Waterbuck Hotel |Chester Hotel | Miale Hotel/(Budget town hotels)

After an early morning breakfast, we depart for Masai Mara via Lake Naivasha. We will have a 1 hour boat ride in this beautiful lake before proceeding to the Masai Mara.

The highest of all the Rift Valley lakes is Lake Naivasha, a beautiful, shallow, freshwater lake fringed by thick papyrus reeds. The waters of the lake draw a great array of birdlife to its shoreline. Buffaloes wallow in the swamps, whilst the large hippo population laze their days in the shallows. Giraffes wander among the acacia, whilst the Colobus monkeys swing from the green canopies above. From here, you also may visit Elsamere and Crescent Island game sanctuary.

Continue through the Great Rift Valley floor via Narok town to the famous Masai Mara Game Reserve. Arrive at the lodge for lunch. Early afternoon spent at leisure. Late afternoon game drive in the reserve – home to the “Big Five” namely: elephants, lions, leopards, buffaloes, and rhinos. There are also cheetahs, zebras, giraffes, wildebeests, hippos, impalas, gazelles, and numerous other wildlife along with many hundreds of species of birds. Return to your Lodge at sundown for Dinner & Overnight.

The Masai Mara is the Jewel in the Crown of East Africa, forever to be associated with vast numbers of game – the greatest wildlife experience of all. Year round the Masai Mara Reserve is host to an enormous concentration of animals, boosted by the famous wildebeest and zebra migration during July/August/October.

All the Big Cats, Elephant, Black Rhino and thousands of plains game spread out before you – it’s better than the Discovery Channel, because you are part of the spectacle. The birds are fantastic – from the giant Martial Eagle to the ground Hornbill, and a myriad of other diverse species. The Mara is undoubtedly Hollywood Africa, grass plains interspersed with Migunga and Croton thickets, rolling hills and small kopjes, and islands in the sea of grass abound.

Small rivers feed massive fig trees on their banks. This is the northernmost extension of the Serengeti ecosystem and is a microhabitat in its own right. You will spend the next 02 nights here to explore. The Mara offers wildlife in such variety and abundance that it is difficult to believe: over 450 species of animals have been recorded here. Dinner and overnight at Mara Sopa Lodge| AA Mara Lodge| Sentrim Mara Camp| Mara Leisure Camp (Luxury) / Destiny Eco Camp |Manyatta Camp ( Budget Tented Camps) Similar- Meal Plan (Breakfast, Lunch, Dinner)

Morning and afternoon game drive, or full day game drive with picnic lunches to explore the reserves’ amazing and high concentration of game. This game reserve is Kenya’s finest wildlife sanctuary. Including migrants, over 450 species of animals have been recorded here. Although July, August and September are the months when the Mara plains are filled with migrating wildebeest and zebra, there also is resident wildlife year round. The famous Maasai tribesmen live within the dispersal area of the game reserve. Dinner and overnight Dinner and overnight at Mara Sopa Lodge| AA Mara Lodge | Sentrim Mara Camp| Mara Leisure Camp (Luxury) /Budget Tented Camp / Similar- Meal Plan (Breakfast, Lunch, Dinner)

After breakfast, depart for Nairobi with lunch en-route. Arrival will be approximately at 15:30 hours. Drop off at the airport, or at your hotel of stay.