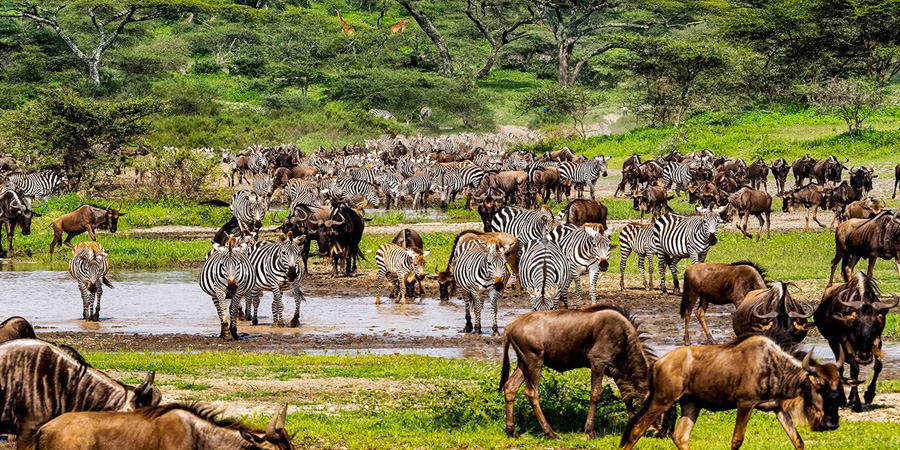 Rwanda And Tanzania Explorer
Rwanda – a hidden Gem of East Africa, explore its primate rich parks and Kigali city before moving onto the wildlife hub of Tanzania’s great northern parks.

Upon arrival at Kigali international airport, you will be met by a Great Lakes Safaris representative; Take up a city tour of Kigali including a visit to the Genocide Memorial site a grim reminder of a senseless massacre of innocent’s lives in 1994. Learn about Rwanda’s history from pre-colonial times to the 1994 genocide; learn about other genocides in the world and how this country has dealt with that past. Tour more and see the new developments in Rwanda; the recovery has been incredible, a testament to humankind’s resilience. The history of Rwanda dates back centuries, Kigali has been a part of it for 100 years. Founded in 1907 as a German settlement, Kigali did not become the capital until Rwanda’s independence in 1962 when it replaced the colonial seat of power in Butare. You will have lunch and afterwards be transferred to Kigali Serena Hotel.

After breakfast, drive to Butare, the second largest city of Rwanda and regarded as the intellectual city of Rwanda. It hosts the National Museum, several academic (Universities) and research institutions, visit Nyanza the former Mwami’s Palace (King’s palace) and the seat of the feudal monarchy. You will also visit the Butare National Museum in Huye which is one of the well set-up if not the finest ethnographic museum of East Africa, a good source of information on the cultural history of Rwanda. You will have lunch in Butare and afterwards proceed to Nyungwe National Park.

Early in morning, hike into Nyungwe Forest, the natural habitats for a huge population of Chimps. Chimpanzees are great apes that are closely related to humans. Nyungwe Forest hosts these intelligent primates who are an endangered species. In the afternoon, you will go for the canopy walk which offers a splendid view over the lush forest with its magnificent biodiversity. Hard wood trees dominate the upper canopy while the lower part is beautified with a large selection of orchids, flora and fauna that flourish better in the higher altitudes.

Today you will depart to Ruhengeri the base for Gorilla trekking at the Parc National des Volcans.

Stop for lunch in Kibuye on the shores of Lake Kivu;

Afterwards proceed to Ruhengeri. Ruhengeri town itself, located only 25km from Uganda border, is relatively a small city. The constant flow of humanity is quite remarkable. The Town has great views of the surrounding volcanoes. People are very friendly here and although a former Belgian colony (and thus French-speaking), many people speak English here.

Early breakfast at your lodge;

0630 hrs: transfer to the Volcanoes National Park HQs. 0700 hrs: Registration, where the park staff determines which group of gorillas you will visit. The park staff discusses your fitness level and advises you of the trekking times and conditions to the various groups based upon their location in the park the previous evening. There are a total of 80 gorilla permits available each day with a maximum of eight trekkers visiting any one group. Once the trekkers are put into groups, each group’s Lead Guide briefs the trekkers of the trekking procedures as well as the “do’s and don’ts” while in the presence of gorillas. After the briefing, trekkers return to their respective vehicles for the drive up the mountain to the starting point. Porters may be hired for the trek to carry your backpack and gear. The cost, US$10 per person/per day. We advise that you utilize this service.

Have an early breakfast at your lodge; 0630 hrs; Transfer to the Volcanoes National Park’s Office to undergo the now familiar gorilla trekking formalities. Then enter the forest for the second trek, visiting a different family from yesterdays. After the trek, rejoin your driver Guide for a transfer back to your Lodge.

Day 7: Travel from Rwanda to Tanzania

Today there are optional park activities if time allows. Afterwards, you willenjoy the scenic drive back to Kigali and proceed to the airport for your departure flight. We recommend you book your own flight from Entebbe to Kilimanjaro Airport as part of your international ticket. Arrival at Kilimanjaro Airport where you will be collected and transfer to Ahadi Lodge located just outside Arusha town.

Depart from Arusha in the morning and begin the drive through a changing landscape to towards Lake Manyara National Park for game drives of this very diverse park. If you are lucky you may see the famous tree climbing lions. Picnic lunch in the bush followed by game drives until mid-afternoon – then slowly make your way out of the park and return to the camp.

Morning wake-up call with bird chorus. After breakfast you head via the Ngorongoro Conservation Area to the endless plains of Serengeti. Game drive en-route to central Serengeti – explore the many different areas of the park, your driver guide will advice on the best places to visit.

Optional: Early morning head out for a Balloon flight. View the Serengeti plains from a hot air balloon

followed by champagne breakfast on the landing site.

A full day of game drives in Serengeti National Park. Head over to the Rock Kopjes where you have good chances of seeing some of the cat families. Cheetah and lion use this giant rock out crops as observation posts.

Early morning descend into the crater for game drives. There are 25,000 large mammals residing in the park. The elephants are mainly bulls, females stay out of the park due to it boasting the largest predator population in Africa. Black Rhino also make their home on the grassy plains, their numbers make up for almost half of what can still be found in East Africa; about 20 in total. Leave the crater early afternoon and return to Arusha.

After a leisurely breakfast at the lodge, slowly transfer to Kilimanjaro airport where you connect with your flight. (B)